ACL Injuries in Kids: What A Parent Needs to Know

ACL Injuries in Kids: What A Parent Needs to Know

Posted by gordie on Jun 3, 2021 in Uncategorized | No Comments

Sports participation by children and adolescents has become increasingly intense and focused over the past three decades.  Associated with this elevated level of sports specificity and training potency has been an increased frequency of injuries previously seen primarily in adult athletes.  Stress fractures, ulnar collateral ligament (UCL) injuries of the elbow, and anterior cruciate ligament (ACL) injuries of the knee are examples often seen by sports medicine-trained orthopaedic surgeons.  The rate of ACL reconstructions in patients age 14 and under increased over 900% from 1994 to 2006, and adolescents and teenagers now represent the largest sector of the population undergoing ACL reconstruction.  What should a parent/athlete know if they are dealing with an ACL tear in a child or teenager?

Ligaments are the soft tissue structures which connect bones together and provide mechanical restraint to excess motion in a joint.  The ACL is the ligament which connects the femur (thigh bone) to the tibia (shin bone) and prevents excessive anterior translation thereof (tibia slipping out in front of the femur).  This checkrein may be torn during both contact and non-contact injuries, often with associated knee damage (meniscus/cartilage tears, medial collateral ligament injuries).  Football, basketball, lacrosse, and soccer are the most common team sports involved with high school athletes,  but ACL tears are also seen in individual sports such as tennis, snow and water skiing/boarding, BMX, and any other activity where rapid changes in direction are demanded.

Traditionally, non-operative treatment was the first line of care for children and adolescents with ACL tears.  The primary reason for this conservative approach was concern for injury to the growth plates of the knee during surgical reconstruction, and the possibility of subsequent growth disturbance in the affected leg leading to shortening or angulation.  Orthopaedic surgeons hoped that bracing and activity modification could prevent the instability and permanent cartilage damage which recurrent injury produces.  However, subsequent studies have shown high rates of recurrent instability and cartilage/meniscus damage in patients pursuing this method of care.  These injuries may produce irreversible damage leading to premature arthritis.  It appears that telling kids not to run and jump just doesn’t work – imagine that!  These data combined with the development of alternative methods for ACL reconstruction, which limit damage to growth plates, have led to a more aggressive surgical approach to these injuries.

For most children diagnosed with ACL tears, surgical reconstruction is generally appropriate.  The reasons for this are twofold.  First, a patient with an ACL tear will most likely experience recurrent instability during athletics, and often in lower level activities of daily living, without surgical reconstruction.  The symptoms of this (pain, swelling, giving way) impair function, and are usually alleviated with successful surgical treatment. Additionally, restoring knee stability with surgical reconstruction protects the meniscus and other structures which are damaged during episodes of instability, and may prevent the onset of arthritis.

ACL surgery entails arthroscopy (insertion of a 4 mm camera into the knee through small incisions), repair of associated meniscal, ligament, or articular cartilage injury, and reconstruction (replacement) of the ACL with a tendon taken from another part of the knee or from a tissue donor (allograft).  In adults, the tendon is placed into bone tunnels in the femur and tibia, which are drilled in an arthroscopic-assisted fashion, where the ACL previously existed. The tendon graft may be fixed with a variety of devices, usually small screws, placed in the bone arthroscopically.  These hold the graft in place until your body converts it into a new ACL, which takes about 6-12 months.  The screws are generally left in place permanently.  The tendon graft is usually taken from the middle 1/3 of the patellar tendon (tendon connecting knee cap to tibia), medial hamstrings (tendon along inner thigh), or from a tissue donor.

In skeletally-immature patients, performing ACL reconstruction in this manner can damage the growth plates on the femur and tibia, leading to shortening or angulation of the leg.  In order to avoid this complication, alternative reconstruction techniques that are designed to spare the growth plates and still provide functional stability are utilized.  The technique used depends on the amount of growth remaining in the leg.  This is estimated by assessing Xray appearance, parental height, and physical maturity of the child to determine the risk of growth damage.  In general, soft tissue grafts (hamstring or IT band) are used as patellar tendon grafts cause growth plate damage.  In very young patients, drilling across the growth plates is completely avoided.  As the child approaches skeletal maturity, technical modifications that allow some drilling through the bone on one side (tibia) but not the femur are permissible.  After puberty, techniques similar to adult reconstruction are utilized, but soft tissue grafts are recommended until completion of growth is documented on Xray or MRI (see figures). 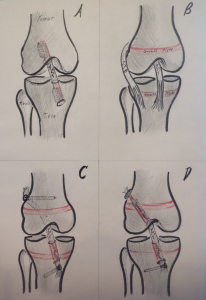 The surgery is usually done on an outpatient basis, with the patient going home the same day as the procedure.  Rehab in adults involves aggressive exercises performed on a daily basis, emphasizing knee flexibility and strengthening, usually overseen by a physical therapist.  This may be altered slightly in younger patients to protect the modified reconstruction by slowing down the progression of weight bearing.  Patients can often begin running at 2-3 months after surgery.

In general, ACL reconstruction is one of the most successful procedures we perform as orthopaedic surgeons, with 90-95% of adult patients being able to return to cutting/pivoting sports at 6-12 months after surgery.  About 90% of pediatric patients return to sports after ACL reconstruction. Unfortunately, the rate of repeat injury is higher in children, with a recent study out of Duke University showing an overall incidence of repeat ACL tears of 32% (20% graft re-tears, 13% opposite knee ACL tears – 1 both) at 5 years after initial surgery in their patient population.  Injury prevention programs which emphasize strengthening and neuromuscular conditioning, particularly as applied to jumping/landing, may help to decrease the risk of injury.  Employing these programs on a more extensive fashion and avoiding the push to rehab children as aggressively as their adult counterparts may help decrease the risk of re-injury.  Be sure that your surgeon has adequate training in this technique (fellowship training in orthopaedic sportsmedicine is helpful), and if you have unanswered questions seek a second opinion.