ACL Reconstruction : What A Patient Needs To Know

ACL Reconstruction : What A Patient Needs To Know

Posted by druser on Dec 5, 2019 in Orthopedic Surgeon | No Comments 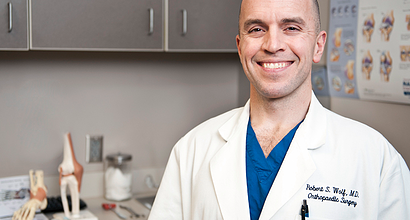 people each year in the United States. It is one of the more common knee injuries

sustained in athletic competition requiring surgical treatment. What should a patient

know when they are forced to make decisions on such an injury?

mechanical restraint to excess motion in a joint. The ACL is the ligament which

translation thereof (tibia slipping out in front of the femur). This checkrein may be torn

during both contact and non-contact injuries, often with associated knee damage

are the most common team sports involved, but ACL tears are also seen in individual

sports such as tennis, snow and water skiing, BMX, and any other activity where rapid

changes in direction are demanded.

In an athletic individual who wishes to continue to participate in sports, surgical

reconstruction is generally appropriate. The reasons for this are twofold. First, a

athletics, and often in lower level activities of daily living, without surgical

reconstruction. The symptoms of this (pain, swelling, giving way) impair function, and

stability with surgical reconstruction protects the meniscus and other structures which

are damaged during episodes of instability, and may prevent the progression of arthritis.

knee or from a tissue donor (allograft). The tendon is placed into bone tunnels in the

femur and tibia, which are drilled in an arthroscopic-assisted fashion, where the ACL

previously existed. The tendon graft may be fixed with a variety of devices, usually

small screws, placed in the bone arthroscopically. These hold the graft in place until

your body converts it into a new ACL, which takes about 6-12 months. The screws are

generally left in place permanently. The tendon graft is usually taken from the middle

Allografts which are irradiated have impaired biomechanical function, and soft tissue

medical literature. I would not recommend using these at this time. Quadriceps tendon

autograft may be a reasonable alternative, but there is insufficient clinical data to

compare it to the above grafts. Stem cell augmentation is unproven at this time, is

expensive, and has been shown to impair function in some studies. There are risks and

benefits to each graft, and choice usually depends on age, prior knee injury status, level

of athletic expectation, cosmesis, and rehab expectations/capacity in terms of pain.

The surgery is usually done on an outpatient basis, with the patient going home the

same day as the procedure. Rehab involves aggressive exercises performed on a daily

therapist. Patients can often begin running at 2 months after surgery. In general, ACL

surgeons, with 90-95% of patients being able to return to cutting/pivoting sports at 6

months after surgery. Be sure that your surgeon has adequate training in this technique

(fellowship training in orthopaedic sportsmedicine is helpful), and if you have